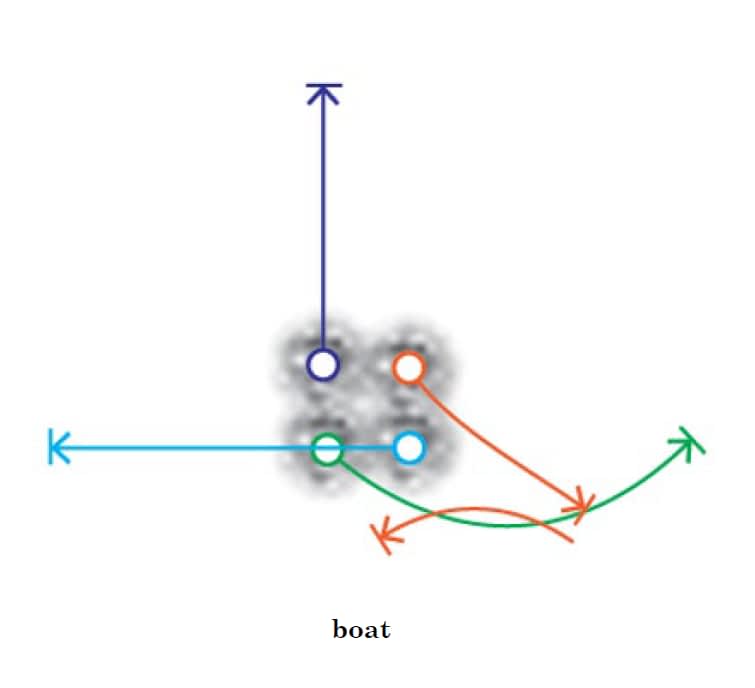 When Gabor patches are shifted behind an envelope over time and positioned in the peripheral region of the visual field, it is possible to produce a perceived position shift though the envelope remains stationary. This phenomenon is fundamental to the system described in this dissertation because of the implication that we can adapt the underlying first principles of the Gabor effect and expand beyond a simple aperture and grating, generating new functional perimeters.  These geometries and mechanics act as an inverse scribe of the natural scene presented to the visual pipeline, activating new modes of media delivery in dynamic environments. 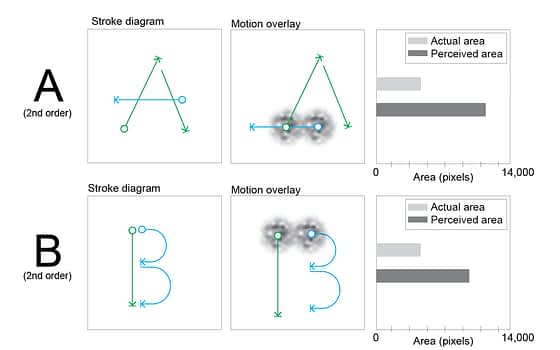 The following samples represent a subset of fundamental geometric vectors, which describe simple form geometries in terms of their perceptual stroke length and accumulative visual area in an x-y coordinate plane (actual vs perceived pixels). For example, in each carrier envelope, the transcribed signal consists of winnowed white Gaussian noise, expanding the expression of a vector velocity producing extended persistence of shape vision.

What is important to note here is the displacement of additive carrier envelopes in relation to the perceived structure.  The bar chart in the figures below illustrates the discrepancy between actual space utilized and perceptual pixel space experienced. 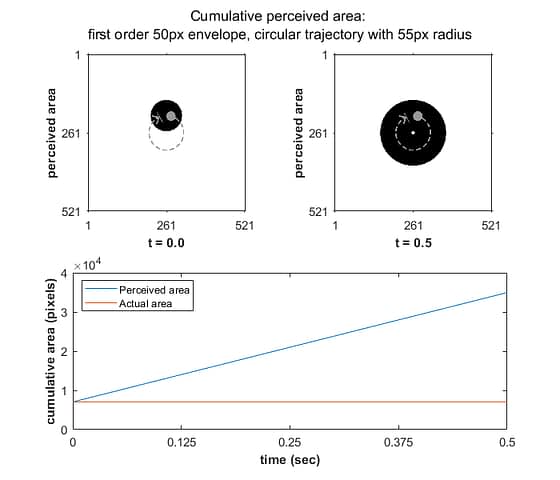 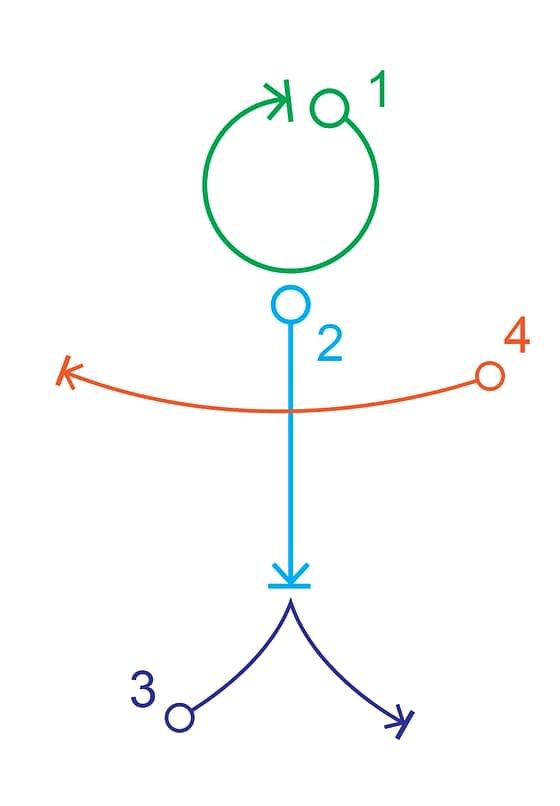 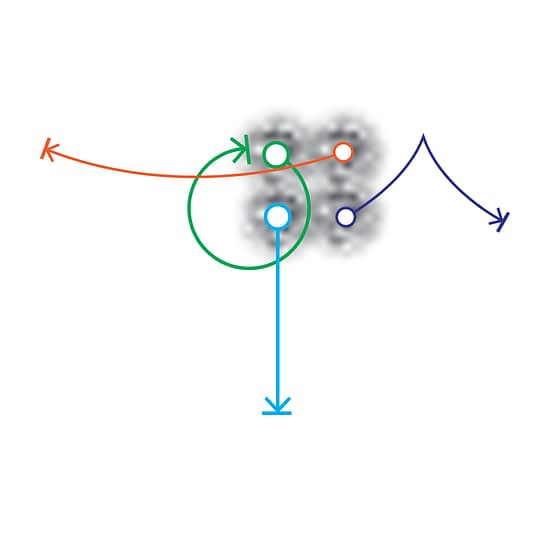 These forms are representative of the coordinate space in which one or more envelopes may be presented in a physical offset from the prescribed reconstruction.  The most valuable asset of this approach is the close onset, or compression, of physical loci within a confined visual environment, i.e. retail space within an x-y coordinate plane or the pixel pitch real estate of digital display technologies. 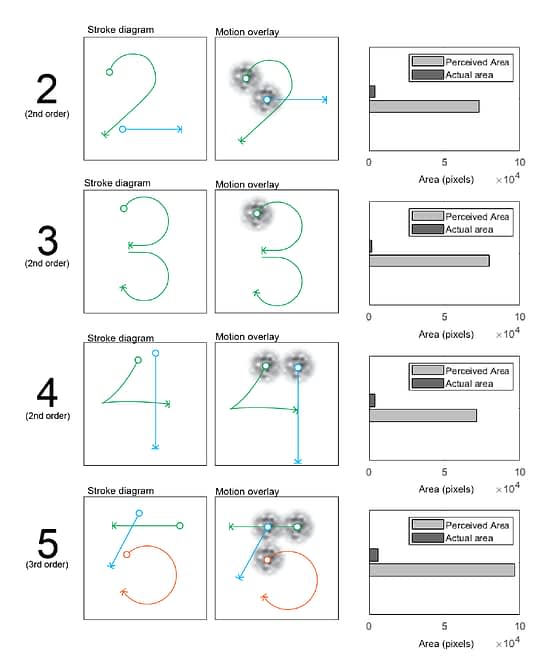 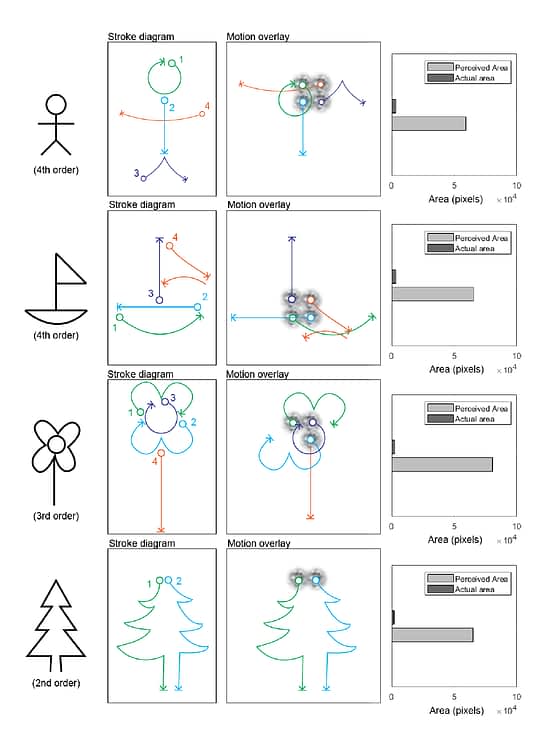 These varied stimuli are objectively evaluated using the multi-stage analysis technique described by Lu and Sperling. Motion energy is calculated for each adapted carrier signal.  First, each carrier signal is decomposed into two projections on the x-t and y-t planes.  Second-order motion energy is obtained by (1) calculating the Michelson contrast, (2) removing the DC component, (3) applying a full-wave rectifier, and (4) computing the three-dimensional Fourier power spectrum.  Total motion energy is given by:

For E_i , where i denotes the quadrant of the power spectrum when plotted on fx-ft and fy-ft planes.  This value is then normalized to account for contrast-gain control [52]:

Where E_total is the total Fourier energy in all quadrants and on the axes.

The two methods of observer perceptual augmentation share the same first step of carrier signal adaptation and differ only in the source motion path used to animate the carrier signals: scene flow motion sources for proprioceptive feedback, and symbol codex path trajectories for semantic information delivery.  A viewing environment was constructed to encompass observer visual field and the design considerations are summarized.  The prototypes and software to capture, stabilize, and align raw footage must also be considered in viewing environment design – the two subsystems were developed and executed iteratively and concurrently.  The carrier signal adaptation process common to the two augmentation goals involves eight steps and examples of chromatically and spatial adapted stimuli are given.  The source motion for proprioceptive feedback is manifest as second order motion carrier signals with trajectory emanating radially from the fovea.  The velocity of carrier signal motion is calculated from ROI optical flow within the scene.  The source motion for semantic information delivery is presented as a codex of symbols decomposed into stroke paths, each accompanied by metrics of actual vs. perceived carrier signal real estate within the visual field.  Motion energy analysis is used to evaluate the carrier signal power spectrum in the Fourier domain across the many varied signal types.  A gaze tracking system, integrated into the study sequence, captures observer fixation and example calibration data are presented.